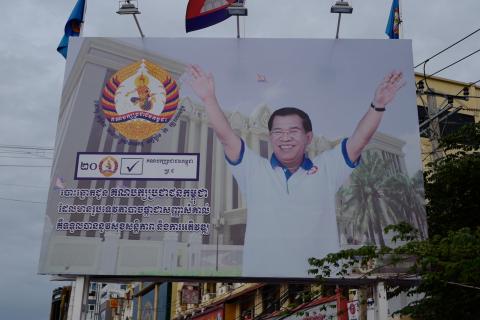 There are no events on Cambodia currently scheduled.

A young Cambodian islander, Phalla Vy, has dedicated herself to monitoring and speaking out against the sand dredging. Kalyanee Mam’s exquisite short documentary, Lost World...

America is deporting Cambodian refugees convicted of crimes. Did the U.S. have a responsibility to help them when they first arrived as refugees? Charles Dunst writes for The Atlantic.

Council on Foreign Relations
Can Hun Sen Pass Power to His Children?

Can Hun Sen Pass Power to His Children?

South China Morning Post
Was Cambodia’s US$300 million Khmer Rouge tribunal worth it?

Was Cambodia’s US$300 million Khmer Rouge tribunal worth it?

After spending nine years and more than US$300 million to prosecute the leaders of Cambodia’s Khmer Rouge responsible for the deaths of 1.7 million of their countrymen, a United Nations-assisted...

‘Adhoc 5’ free despite being sentenced to five years in jail

The Adhoc 5 were found guilty by the Phnom Penh Municipal Court on Wednesday and sentenced to five years in prison. They were charged with bribing a witness in the case of bailed Cambodia National...

Cambodians went to the polls last weekend, but it was a sham of an election, dominated by Hun Sen, the country’s aging autocrat. With the opposition party banned and soldiers at polling booths to...

Connect with other NYSEAN members focused on Cambodia. Add your name.

Sorry, no Teaching Cases are available for the topic Cambodia.