The Diplomat: A Closer Look at the ASEAN-China Single Draft South China Sea Code of Conduct

Cambodians went to the polls last weekend, but it was a sham of an election, dominated by Hun Sen, the country’s aging autocrat. With the opposition party banned and soldiers at polling booths to ensure the outcome went only one way, no credible organization signed off on the election’s validity—but quite a few fake organizations did.

NYSEAN Partner Institute for Policy Analysis of Conflict released "Managing Indonesia's Pro-ISIS Deportees", a report on the complex problem of how to monitor and integrate pro-ISIS deportees. 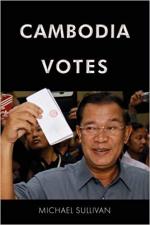 Ahead of a nominal general election scheduled in Cambodia for the end of July 2018, Michael Sullivan, author of Cambodia Votes: Democracy, Authority and International Support for Elections 1993–2013 (NIAS Press, 2016), joins New Books in Southeast Asian Studies to make a case for elections there, however fraught, as a site of authentic struggle.

NYSEAN's co-founder Professor Duncan McCargo was quoted in a New Arab article titled "After Middle East failure, is Thailand the next 'caliphate' for the Islamic State group?"