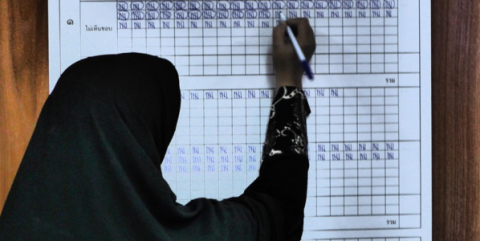 In recent months, public life in Thailand has been overshadowed by the momentous October 13, 2016 passing of long-reigning King Bhumibol, and the December 1 accession of the King Vajiralongkorn to the throne. Although a popular referendum approved the 2016 draft constitution last August, that constitution has yet to pass into law, and no date has been set for the next general election. As the ruling military junta completes its third year in power, freedom of expression remains severely constrained, and Thailand faces a range of economic and social challenges. During this third Columbia...

There are no events on Economy currently scheduled.

Australian National University hosted an Indonesia Update last month. Video of all the lectures is available now on New Mandala.

The Asia Foundation
ASEAN: Shaping the Future of Regional Development in Southeast Asia

ASEAN: Shaping the Future of Regional Development in Southeast Asia

Recent developments in the region indicate that governments are looking for new ways to shape development cooperation on a regional basis. The Asia Foundation’s recently released report ASEAN...

Facebook’s global expansion has been linked to political turmoil overseas, so maybe their ads should focus less on how they “connect the world” and more on why connecting people isn’t always the...

After the initial euphoria, Mahathir and his government now confront major challenges on nearly all fronts. The Council on Foreign Relations' Joshua Kurlantzick looks at the political, economic...

This week, many of Thailand’s 68 million people will celebrate Buddhist New Year, also known as “Songkran.” It’s a joyous time as families and friends reunite across the country to celebrate....

The Telegraph
Malaysia tourist board ridiculed for ‘hideous’ new logo

"The technicoloured design, released on Friday at the ASEAN Tourism Forum in Chiang Mai, features clip-art style illustrations of the Petronas Towers, an orangutan and proboscis monkey wearing...

In recent months, public life in Thailand has been overshadowed by the momentous October 13, 2016 passing of long-reigning King Bhumibol, and the December 1 accession of the King Vajiralongkorn to...

Abstract
This article details the argument for the economic origins of the secessionist challenge posed by Indonesia's four resource-rich regions. The desire of rich regions to retain their own wealth conflicts with the national goal of sharing social welfare for equitable development across the country. The grievances of relative deprivation and aspiration to inequality were related to the distribution of resource rent by the autocratic regime of Suharto. Democratic transition opened up political space in which the resource-rich regions addressed their grievances, pushing the country to the edge of disintegration. The main policy response to the problem was decentralisation as part of the overall democratisation process. The policy has been successful so far in achieving its political objective; however, in the long run, people of the rich regions may be disillusioned because there is a risk that the supposed economic benefits of decentralisation may not materialise.

Connect with other NYSEAN members focused on Economy. Add your name.